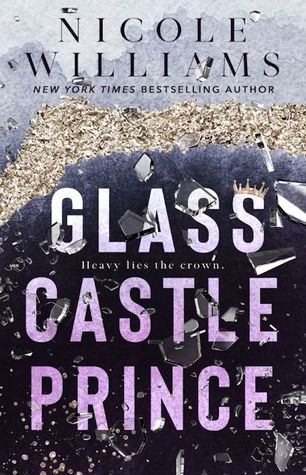 A glass castle shatters as easily as a glass house—all it takes is one stone.

Prince Edward has known this all of his life, and taken staunch measures to ensure he doesn’t give the public any reason to pick up their rocks. Or torches. Or pitchforks. As a twenty-two-year-old in line to ascend the throne, he lives more like a cloistered monk than his college-aged peers. Restraint is the tone of his life, resilience the theme.

That is, until he meets a young woman who couldn’t care less about his title—unless she’s poking fun at it. Charlotte Everly grew up a stone’s throw away from the royal family’s summer house, but her life was, and is, entirely different from the prince’s.

They clash at each turn, disagree on every topic, and bear a general contempt for one another. Until . . .

One night, accompanied by one proposal, leads to one lapse in judgment . . .

Results in a nationwide scandal neither of them will escape.

“I live in a glass castle where everyone and anyone throws stones based on hearsay and half-truths. I didn’t want the same for you.”

Glass Castle Prince had great potential, but when the plot started to fall flat for me, that’s when the book started losing my interest. Everything seemed so…instantaneous. I felt like I blinked and missed something when it came to Edward and Charlotte. And the whole, inexperienced/practice, was lost on me. It wasn’t Nicole’s strongest plot, in my opinion.

The best thing about Nicole Williams is she always creates likable characters, even if they are secondary. Her secondary characters were my absolute favorite in this one! The banter and the wit was a great addition to the story line and one that was necessary.

Charlotte wasn’t my favorite type of character, but her character showed growth that I tend to look for in a lot of books. She grew in a way that a lot of heroines do not and for that I was thankful.

“I was a wreck. In the best possible way. A breathless, trembling, whirling mess.”

The twist was predictable, but it was still a great addition to the story. I really liked the fairy tale feel and the happily ever after, it all seemed so fitting. If you’re looking for a light, fun, and witty read I would highly recommend this one. It didn’t evoke a lot of feelings from me and the plot didn’t spark any interest but I still enjoyed it nonetheless.