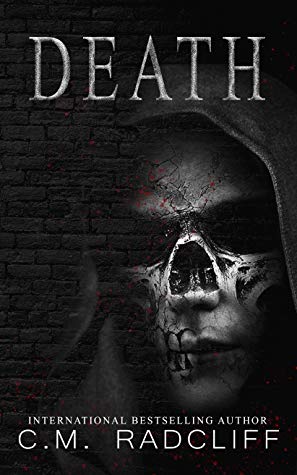 Surrounded by violence and hatred, I was born with a target on my back.
The monsters sought after me, slowly tainting my soul.
A person can only withstand so much before they snap.
I’m a grenade and they pulled the pin.
Tick, tock; the clock’s running out.

We all come into this world, sentenced to death.
And when he calls, we have to answer.

As for me, I’ll be making the calls.
I am Death.

Death was not my typical read (I have to throw that out there right now) but I do have to say: once I started reading it, I had a hard time putting it down. I think since reading the first set of books from C.M. Radcliff that I had read, her writing (especially for this genre) has improved immensely! That’s always a plus for me. Growth.

The story itself was quick paced and sharp. It was told in past and present POV and in my opinion, that fit this story and Curtis perfectly. Especially the way that he tells his story. I liked that he told it in a way that didn’t make us wonder what made him the way he was, no holds bar. AND! adding in the reporter’s POV was a nice touch as well.

Not having a HEA was my fave thing about this book. Curtis didn’t deserve it. No matter how much I wanted to think that he did, I couldn’t bring myself to root for him. Life handed him a shitty hand, true, but he chose to be a product of his past. He had choices– he chose the wrong one.

If you like to dip into the dark genre and like to have a quick paced read, I think Death would be a good one for you. It doesn’t consume too much of your time and I think the elements inside of the story make it readable in one sitting. At times it’s gritty, cringe-y, and hard to read but I think it’s what made the story what it was as a whole.

One thought on “Death (C.M. Radcliff)”